Over the holiday break the first year Iron Horse program took part in one of the largest girls tournaments on the east coast the Carolina Invitational. The 2017 field consisted of 72 teams with nine division Champions and an All-Tournament team.  Philip Simmons participated in the Harbor Division with schools; Academic Magnet(SC), Charleston Math and Science(SC), Augusta Prep(GA), David Crockett(TN), Palmetto Scholars(SC), Stratford(SC) and Charlotte Christian(NC). After a one point lost to Academic Magnet 39-40 in their opening game the Iron Horses found themselves having to rebound on day two against Palmetto Scholars. Rebound they did while coming back from 20 points down in the 3rd quarter. The team scored 30 points in the 4th quarter and ended up winning 59-54. Day three the team lost 30-41 to Charleston Math and Science.  The team finished 1-2 and 6th in their division. The Iron Horses had one of our own qualify and make the All-Tournament team. The All-Tournament team is selected by the coaches from each division. 7th grader Kylee Kellerman was named to the All-Tournament Team as she averaged 15 points, 6 rebounds, 5 steals and 4 Assist. Win the Day! 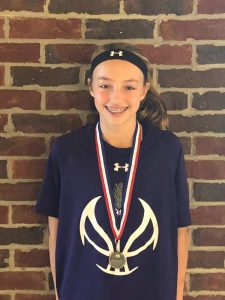